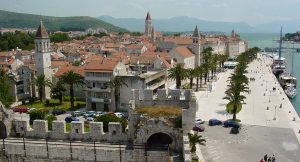 Trogir is a historic town and harbour on the Adriatic coast in Split-Dalmatia County, Croatia, with a population of 10,818 (2011) and a total municipality population of 13,260 (2011). The historic city of Trogir is situated on a small island between the Croatian mainland and the island of Čiovo. It lies 27 kilometres (17 miles) west of the city of Split.

Since 1997, the historic centre of Trogir has been included in the UNESCO list of World Heritage Sites for its Venetian architecture.

Trogir has 2300 years of continuous urban tradition. Its culture was created under the influence of the ancient Greeks, and then the Romans, and Venetians. Trogir has a high concentration of palaces, churches, and towers, as well as a fortress on a small island, and in 1997 was inscribed in the UNESCO World Heritage List. “The orthogonal street plan of this island settlement dates back to the Hellenistic period and it was embellished by successive rulers with many fine public and domestic buildings and fortifications. Its beautiful Romanesque churches are complemented by the outstanding Renaissance and Baroque buildings from the Venetian period”, says the UNESCO report.

Trogir is the best-preserved Romanesque-Gothic complex not only in the Adriatic, but in all of Central Europe. Trogir’s medieval core, surrounded by walls, comprises a preserved castle and tower and a series of dwellings and palaces from the Romanesque, Gothic, Renaissance and Baroque periods. Trogir’s grandest building is the church of St. Lawrence, whose main west portal is a masterpiece by Radovan, and the most significant work of the Romanesque-Gothic style in Croatia. more info