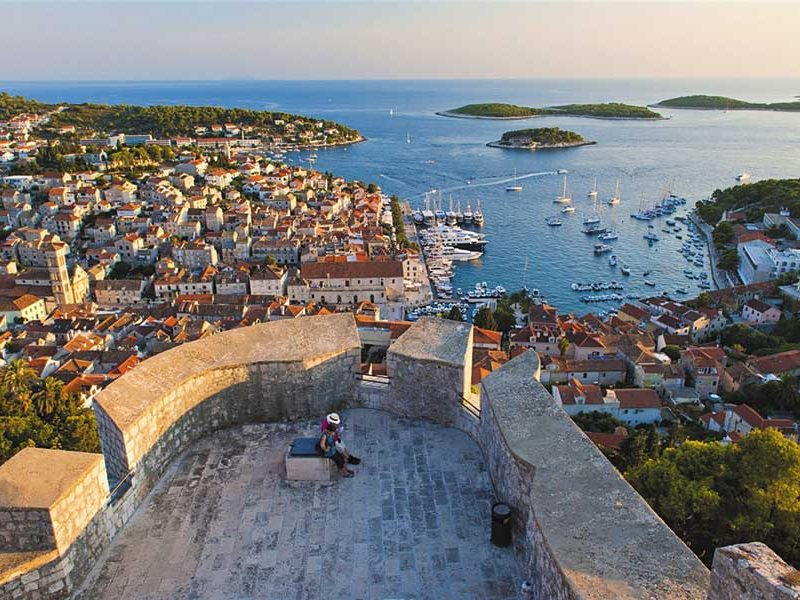 Hvar, a Croatian island in the Adriatic Sea, is best known as a summer resort. Highlights of the port town Hvar include its 13th-century walls, a hilltop fortress and a main square anchored by the Renaissance-era Hvar Cathedral. The island also features beaches such as Dubovica and inland lavender fields. Boat excursions serve the nearby Pakleni Islands, which have secluded beaches and coves. Approximately 68 km (42.25 mi) long, with a high east-west ridge of Mesozoic limestone and dolomite, the island of Hvar is unusual in the area for having a large fertile coastal plain, and fresh water springs. Its hillsides are covered in pine forests, with vineyards, olive groves, fruit orchards and lavender fields in the agricultural areas. The climate is characterized by mild winters, and warm summers with many hours of sunshine. The island has 11,103 residents, making it the 4th most populated of the Croatian islands.

Hvar’s location at the center of the Adriatic sailing routes has long made this island an important base for commanding trade up and down the Adriatic, across to Italy and throughout the wider Mediterranean. It has been inhabited since pre-historic times, originally by a Neolithic people whose distinctive pottery gave rise to the term Hvar culture, and later by the Illyrians. The ancient Greeks founded the colony of Pharos in 384 BC on the site of today’s Stari Grad, making it one of the oldest towns in Europe. They were also responsible for setting out the agricultural field divisions of the Stari Grad Plain, now a UNESCO World Heritage Site. In medieval times, Hvar (city) rose to importance within the Venetian Empire as a major naval base. Prosperity brought culture and the arts, with one of the first public theatres in Europe, nobles’ palaces and many fine communal buildings.

Every visitor of this ancient city is sure to find his own fraction of tranquillity and magic, so generously offered by this charming place. Strolling along the monuments such as Fortica Fortress, Hvar Cathedral, theatre, Arsenal and franciscan monastery will lead you through the long history of this city, whose every stone is telling its own old story. Should you be in pursuit of crystal clear sea, enchanting perfume of the Mediterranean plants and plenty of sunshine, Hvar is the place to seduce you with its beaches, nearby bays and island chain.

Place to see – Pakleni otoci
In front of the town of Hvar there are some twenty islands and rocks called Forski škoji (Islands of Hvar), representing a vast Hvar tourist resort. For all those looking for the charming summer vacation they offer the abundance of sunny beaches, restaurants, and all kinds of other intersting places for mind and body as well. Boats connetc Hvar port with most of Hvar tourists resorts.