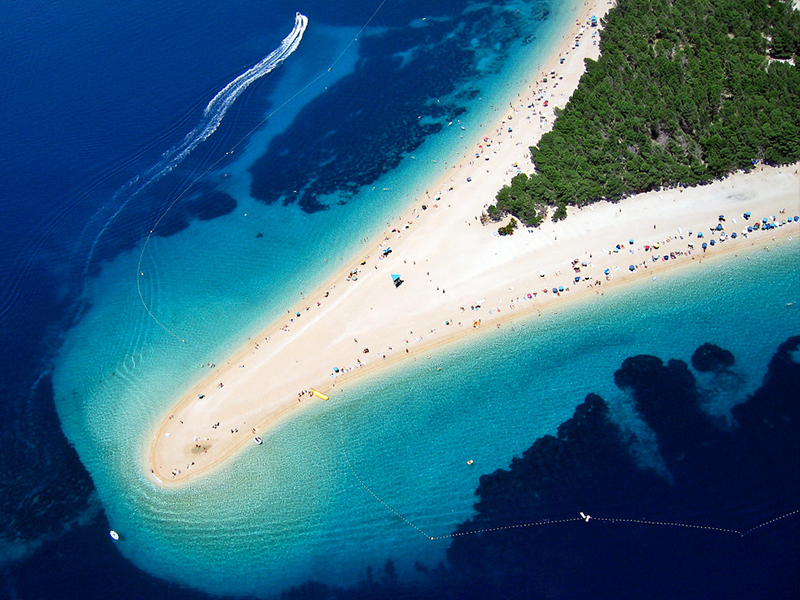 Brač is an island in the Adriatic Sea within Croatia, with an area of 396 square kilometres (153 sq mi), making it the largest island in Dalmatia, and the third largest in the Adriatic. It is separated from the mainland by the Brač Channel, which is 5 to 13 km (3 to 8 mi) wide. The island’s tallest peak, Vidova gora, or Mount St. Vid, stands at 780 m, making it the highest island point in the Adriatic. The island has a population of 13,956, living in numerous settlements, ranging from the main town Supetar, with more than 3,300 inhabitants, to Murvica, where less than two dozen people live. Bol Airport on Brač is the largest airport of all islands surrounding Split. The Zlatni Rat, often referred to as the Golden Cape or Golden Horn, is a spit of land located about 2 kilometres west from the harbour town of Bol on the southern coast of the Croatian island of Brač, in the region of Dalmatia.

Bol is situated on the southern part of the island Brac, and is the oldest town on the coast of Brac. This little town was founded long ago and became an extraordinary tourist oasis because of the wide gravel and sandy beaches which expands over 10 km and the sources of drinking water.

Above Bol is rising the coronet of Bols hills, the illlyrian fortress Kostilo (660 m) and the Vidova gora (778 m), the highest top of the Adriatic islands. Bol is only 15 km away from the international tourist and sports airport “Brac”, and excellent connected with the fast lines to the coast, but also with a ferry- line from Supetar.

Place to see – Beach Zlatni rat
It is not possible to avoid the Zlatni rat, certainly the most beautiful beach on the Adriatic sea, whose cape is turning one moment to one side and the other moment to the other side playing a strange game with the wind and the waves.